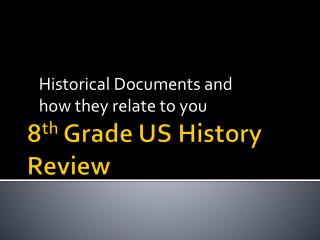 Historical Documents and how they relate to you. 8 th Grade US History Review. Learning Targets:. Explain how the Declaration of Independence reflects an application of Enlightenment ideas to the grievances of British subjects in the American colonies. 8 th Grade Review - . part one. the teachings of enlightenment thinking listed above provided the basis for the. natural

8 th Grade US History Week 25 Benchmark - . to hear each question, click on the number of the question on the next slide.

8 th Grade Review - . part 2. during the 1800s, the movement of large numbers of immigrants from many different countries

Test Review 8 th Grade - . chapter 9 – antebellum era. what was the largest group of immigrants who came to the united

8 th Grade Science Review - . what we have learned this year. standard 1 motion. the velocity of an object is the