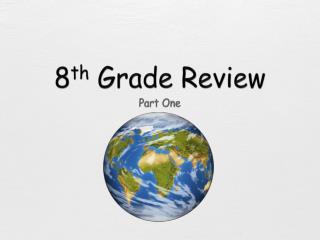 8 th Grade Review. Part One. The teachings of Enlightenment thinking listed above provided the basis for the. natural rights separation of powers political equality. A. establishment of democratic government. B. teaching of the Protestant Reformation. C. calling of the crusades.

Welcome to 8th Grade Science! - . please find your seat by asking each other’s last name and then sit alphabetically!

8th Grade Semester One English Exam Review - . to be used in conjunction with review handout and your textbook. nouns.

8 th Grade Science Final Review - . density. density is how compact something is. the formula is d = m/v as temperature

Welcome to 8 th grade science - . info you need to succeed!. your teacher…karen miller. i l ove science i r ead about

Your 8 th Grade Field Trip (Colonial Outbound in October of 2012) - . developed and presented by the eighth grade