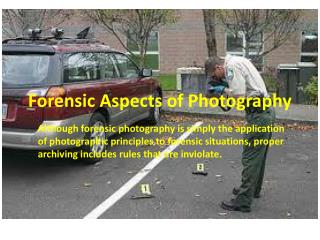 Forensic Aspects of Photography. Although forensic photography is simply the application of photographic principles to forensic situations, proper archiving includes rules that are inviolate. . Invariant Rules of Forensic Photography.

Photography: A Critical Introduction - . thinking about photography. what is this lecture about? debates and key writings

FORENSIC ODONTOLOGY - . prepared and presented by shabeel pn. forensic is derived from the latin word forum which means