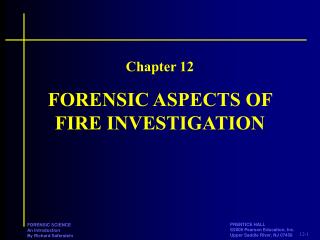 FORENSIC ASPECTS OF FIRE INVESTIGATION. Chapter 12. Introduction. Arson investigations often present complex and difficult circumstances to investigate due to the fact that the perpetrator has thoroughly planned the act, is not present during the act, and the destruction is so extensive.

Arson - . what is fire?. a study of arson needs to begin with an understanding of fire. fire is a rapid oxidation of a

Forensic Aspects of Photography - . although forensic photography is simply the application of photographic principles to

Forensic Aspects of Fire Investigation - . objectives: define oxidation. define energy and give examples of its different