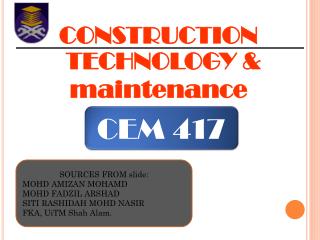 The future of construction: Technology, Material & Innovation - The construction industry has undergone continues

NEW CONSTRUCTION TECHNOLOGY - . a proposal having opportunity to generate rs 2,10,600 cr. (us $468 billion) the saving

Construction HHS - Construction technology. definition : is all the technologies used in designing and building

CH 20 CONSTRUCTION TECHNOLOGY - . 1. apartment — units owned by a company or individual and rented to the people living