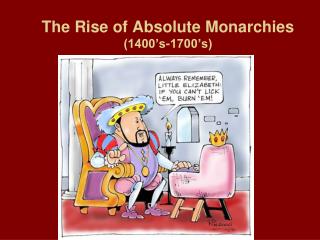 Order From Chaos: The Greek Temple and the Classical Orders - . i. greek prehistory: the bronze age in the aegean sea,

Standard 7.2 - . the student will demonstrate an understanding of the concept of absolute monarchies and constitutional

Absolutism In Western Europe - . 1589-1715. factors that contributed to the rise of absolute monarchies. climate changes

Forms of government - . big ideas. 1) what are the differences between monarchies, republics and dictatorships? 2) what

The Age of Absolutism - . when kings and queens had absolute power!. what does “absolute” mean?. something that does

The Rise of Absolute Monarchs - . unit 5. rise of absolutism. from weak king to absolute monarch end of middle ages,