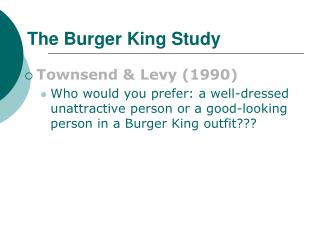 The Burger King Study. Townsend & Levy (1990) Who would you prefer: a well-dressed unattractive person or a good-looking person in a Burger King outfit???. Cues to resources – Clothes . Burger King study: Townsend and Levy (1990) looked at the effects of male status and ornamentation. Burger King in Mumbai - Burger king is an international food brand chain that has come to india. with its office in lower

Comparing and contrast burger king - . by harry u mmole and sam michael. normal diet . 7oz of grains 3 cups of vegetables

Jack In The Box Vs. Burger King - . by: amber smith and greg ellis jr. jack in the box