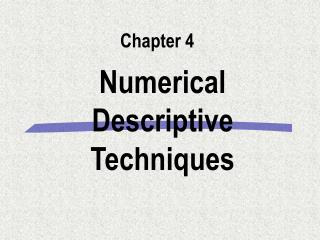 Numerical Descriptive Techniques. Chapter 4. Introduction. Recall Chapter 2, where we used graphical techniques to describe data:. While this histogram provides some new insight, other interesting questions (e.g. what is the class average? what is the mark spread?) go unanswered. Clustering of non-numerical data - . presented by rekha raja roll no: y9205062 . clustering involves the task of