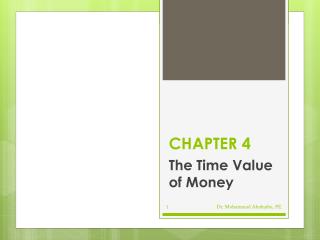 CHAPTER 4. The Time Value of Money. Money. Medium of Exchange -- Means of payment for goods or services; What sellers accept and buyers pay ; Store of Value -- A way to transport buying power from one time period to another; Unit of Account --