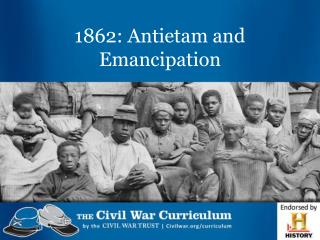 Second Manassas, Antietam, and the Emancipation Proclamation - . lsn 10. end of the peninsula

Major Events of the Civil War - . 9 th grade american history miss mitton. click the flag to begin. click on an event to

1862 - . the confederacy looks like its winning time for desperate measures in the north. why?. north has not won any

Emancipation - . activity: answer the following question : what does “emancipation” mean?. emancipation: the act of

The Battle at Antietam and the Emancipation Proclamation - . lincoln’s army. for a year and a half the war was not