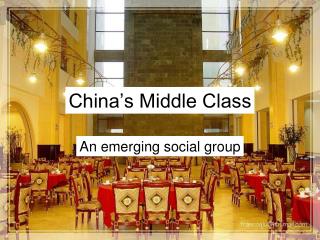 China’s Middle Class. An emerging social group. Middle Class. Originally, those inhabitants of medieval towns in France who occupied a position somewhere between the peasants and the landowning nobility were referred to as Bourgeoisie Conflicts and Change in the Middle East - . middle east:. physical setting. the middle east has been a crossroads for