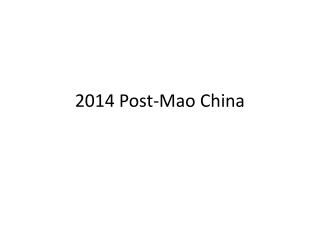 2014 Post-Mao China. China: From Mao to Now. Mao Zedong VS Deng Xiaoping? Is the China that emerged in the 1990s the type of China that Mao Zedong had envisioned and worked toward? To what extent did Deng Xiaoping’s policies and crackdowns change China? CHINA AFTER MAO - . essential question : how did china evolve in the years after mao zedong’s death?. mao zedong was

MAO AND CHINA - . prescribed subject 2 - the emergence and development of the people’s republic of china (prc), 1946 to

China After Mao - . mr. ornstein willow canyon high school ib history. answer???. “it does not matter if the cat is

China Under Mao - . essential question: how did life in china change under mao’s rule?. mao set about building a

Mao and china - . chapter 14, section 3 collapse of imperial rule!. what was the role of foreigners in china circa 1900?.