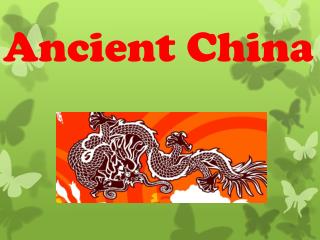 Ancient China. Ancient China: Section 1 Contrasting Climate and Landforms. Southern China- warm and wet as a result of the Monsoons from the South China Sea Northern- cool and dry, dependent on rivers as a source of water Located on the Eastern side of Asia

Ancient China - . i. introduction:. china has high mountains in the west, its rivers flow east, thus china was isolated

Jeopardy! Ancient China - . questions with a * will not be included on the test. why was the great wall of china built?.

QING CHINA AND A REVIEW OF ANCIENT CHINESE HISTORY - . essential question : how was china affected by global changes

Ancient Asia - . what do you know about china?. river dynasties in china. role of geography in china. two major rivers,

Geography of Ancient China - . draw this in your notebook. questions and titles. geography of ancient china. what are the

Ancient China - . objectives: 1. investigate historical sites and traditions in china that give china its cultural