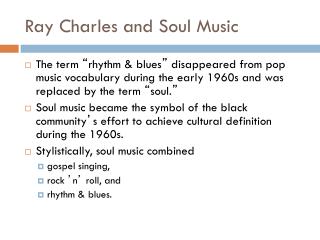 Ray Charles and Soul Music. The term “ rhythm & blues ” disappeared from pop music vocabulary during the early 1960s and was replaced by the term “ soul. ” Soul music became the symbol of the black community ’ s effort to achieve cultural definition during the 1960s.

BODY, MIND AND SOUL - . body. by being healthy and going to the gym to make exercise. taking care of my skin, my face, my

Body, Soul and Spirit - . “and the lord god formed man of the dust of the ground, and breathed into his nostrils the

Body, Soul, and Spirit - . “and the lord god formed man of the dust of the ground, and breathed into his nostrils the

Music: The Peephole To The Soul - . by: katarina knowles . music in society. music has a significant affect on its

Heart and Soul - . &quot;for god so loved the world that he gave his one and only son, that whoever believes in him Motown and Stax : Soul Music Breaks the ColourBarrier of the Recording Industry - . much of soul music can be traced back

SOUL WINNING and SERVICE - . god did not have to put us in the equation for people to get saved. he could have had an

MUSIC Language of the Soul - . raquel kunzler. music and health. medical practitioners have linked music to our general

Poetry: “the music of the soul” -Voltaire - . poems can be written in many forms and styles but you can study poetry