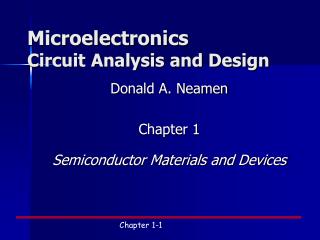 Microelectronics Circuit Analysis and Design. Donald A. Neamen Chapter 1 Semiconductor Materials and Devices. In this chapter, we will:. Gain a basic understanding of semiconductor material properties Two types of charged carriers that exist in a semiconductor

Circuit analysis summary - . after finding the circuit inputs and outputs, you can come up with either an expression or a

Circuit Analysis Tools - We will need to have our circuit analysis tools well in hand. we will need: loop and node

Oscillators circuit analysis - . identifying the open loop gain is a useful technique for oscillator analysis however

It is a privilege (and joy) to visit many times and work together. - Thanks to psu math particularly xiantao li, chun liu