Traits of an Epic and Epic Hero - PowerPoint PPT Presentation 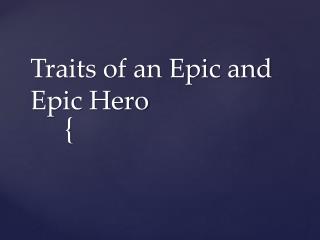 Traits of an Epic and Epic Hero Traits of an Epic and Epic Hero. Epics start in the middle – they often used flashbacks or a prologue Characters have long monologues The hero takes a journey to the underworld, either symbolically or literally They have epic similes, also called Homeric similes

Traits of an Epic and Epic Hero

The Greeks - . chapter 4 review. bronze-using peoples who lived on crete. who are minoans?. body of water that greeks

Learned versus Inherited Behavior - . what are inherited traits?. physical traits that are a result of our genes. what