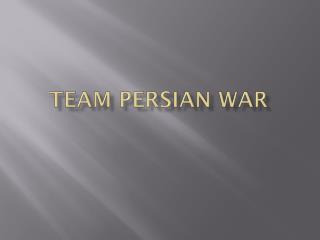 The Olympics - . origin of the ancient olympic games. an athletic and religious celebration held in olympia held every

The Polis – Athenians – and Spartans! - . the rise of the polis – the city state!. during the dark age groups of “Sumer and Babylon” - . stripes team yokota middle school. “this is an ancient mesopotamian riddle. see if you can

Aim: How did the Persian Wars transform Athens into the most powerful city-state? - . do now: based on our discussion

The Iraq War - . u.s. enters iraq in search of weapons of mass destruction. however, both israel and north korea are

Solanaceae (Nightshade family) - How to grow these plants? excluding potatoes, all members of this family need warm

Stadium tributes to Chapecoense soccer team - Fans of chapecoense and atletico nacional, the colombian team they were set