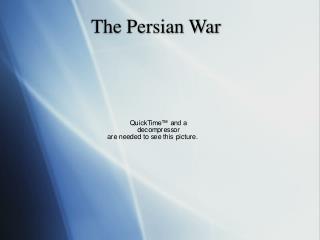 The Persian War. How did the Greeks defeat the most powerful empire in the world?. 500 – 499 B.C.: The Ionian Revolt. Ionian states revolt against Persian conquerors Athens and Eretria come to their aid. 490 B.C.: Battle of Marathon. Darius decides to punish Athens and Eretia The Greco-Persian War - . the greeks were not alone. other civilizations were developing around the mediterranean. one of

The Persian Gulf War - . ss7h2. introduction. persian gulf war began on august 2, 1990 . it was a conflict between iraq

Greco-Persian Wars - . greco-persian wars. ionian revolt 498 bc – a revolt broke out on the ionian peninsula when