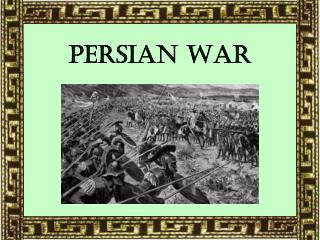 Persian War. King Darrius I. -King Darius initiated the Persian Wars, to expand his empire to Greece. -He also wanted to punish the Athenians and the Eretrians for their part in the Ionian Revolt. -He began the First Persian Invasion around 510 BCE Team Persian war - . the battle of