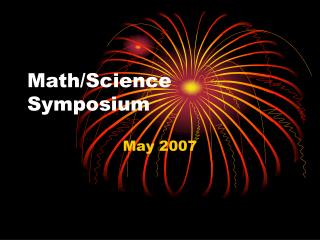 Math and Science Team - . parent information oct 2012. what is mst?. math and science team (mst) is an opportunity for

How to improve math and science education given the complexity of the system? - The math science partnership of greater

Chapter 11: Teaching and Learning with Technology in Math and Science - . megan herrmann and kyle leshon. video:

Contextual Analysis in Math and Science - . what is the role of reading in the content areas (math &amp; science)?.

Raising the Bar on Math &amp; Science in our Schools The Supercomputing Challenge! - . nmtc february 2009.