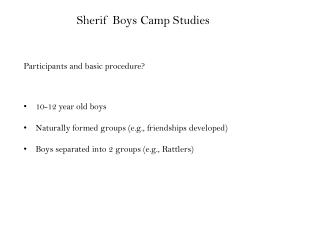 Boys Paddling Camp - If you are interesting in camp and want to enjoy then come with us, we provide you boys paddling

The Sherif Study - . autokinetic effect - what is it? bringing people together in a group let them make estimates

Boys Will Be Boys - . a practical approach to dealing with our most challenging middle school boys. the world view of