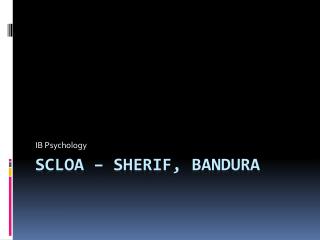 IB Psychology. SCLOA – Sherif , Bandura. Pair & Share…. Review your Prejudice & Discrimination worksheet ( homework) together with the person sitting beside you. Hand it in! Review Robber’s Cave questions and be prepared to discuss. Sherif : Robber’s Cave. Albert Bandura : A Study of the Correlation Between One’s self-efficacy and Performance in math - . andree ory.

Albert Bandura - . observational or social learning. albert bandura. ba from ubc; ma and phd from u of iowa joined

You Trashy! - . kelly maxwell &amp; sherif mabrouk. but what does it

Albert Bandura- the Bobo doll experiment - . paul im jennifer kim. who is he?. born 1925 in canada self education (seems

I Think I Can - . i think i can. how attitudes affect altitude and career goal obtainment. objective . self-efficacy