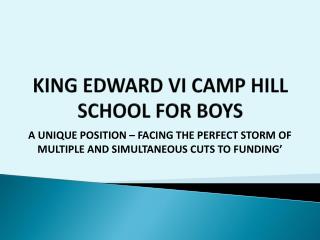 KING EDWARD VI CAMP HILL SCHOOL FOR BOYS. A UNIQUE POSITION – FACING THE PERFECT STORM OF MULTIPLE AND SIMULTANEOUS CUTS TO FUNDING’. This is not news – it has been predicted !. Change of Government: - loss of (three) specialism funding (£240 000 per year) Venturing - . the next step…. bsa has steadily expanded the reach of its value-based programs. 1910 boy scouting for

WELCOME TO BRC BOOT CAMP! - Brc boot camp – are you employing the best practices in your benefit review conferences?

Welcome to Royal Family KIDS Camp Training - . introductions. ice breaker: tell us about yourself- in 30 seconds tell us