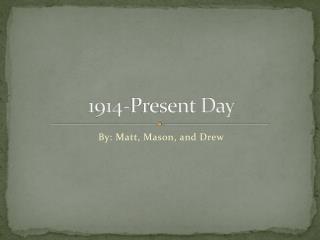 Everything you need to know from 1914-Present Day - . brought to you by chase svoboda, jorge araujo , and will garnes.

Present Day - . overview. indaco metals is a retailer and manufacturer of metal buildings and building components.

Recent Stuff 1914 to Present - . the big picture. how do nationalism and self-determination impact global events? are