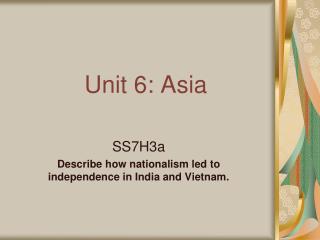 Unit 6: Asia. SS7H3a Describe how nationalism led to independence in India and Vietnam. SS7H3:. The student will analyze continuity and change in Southern and Eastern Asia leading to the 21 st century . Agenda: Independence in Vietnam.