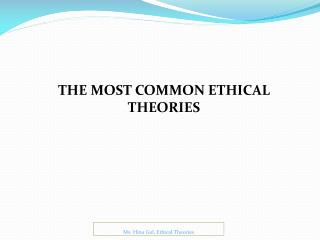 THE MOST COMMON ETHICAL THEORIES THE MOST COMMON ETHICAL THEORIES

Feminist Theories: Gender, Power, and Crime - . the rise of feminist criminology. for much of its history, criminology

Understanding and Applying Theories of Career Development - . chapter 2. questions to ask about theories. how well does

Theories of Drug Use - . lecture 5. what to expect in this lecture. what is theory? nature theories biological theories