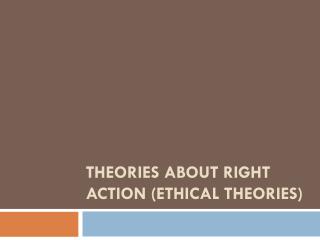 Consequentialist Theories of Ethics - . do consequences make an action right?. many ethicists have argued that we should

Moral Theory - . an explanation of why an action is right or wrong or why a person or a person’s character is good or

Ethical Theories - . high-level account of how questions about morality should be addressed. similar to engineering