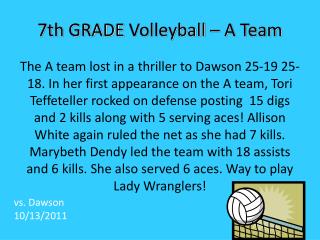 WELCOME TO THE 2015 PRODIGY VOLLEYBALL PARENT INFORMATION MEETING - . how many returning from last year? how many new to

Volleyball - . invented by businessmen at lunch break court size—30x60 team has 6 players after whistle you have 5

VOLLEYBALL … - . … is more than passion. volleyball is a team sport in which two teams of six players are separated

The Physics of Volleyball - . by: grace murdoch and mady welsh. the history of

VOLLEYBALL - . how volleyball is played:. maximum of three hits per side. player may not hit the ball twice in succession

Volleyball - . my favorite sport is volleyball. i love to play volleyball and i want to be a volleyball player. every