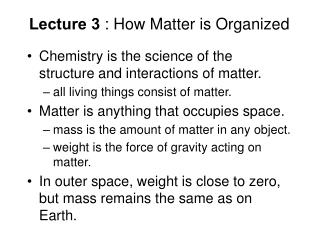 Lecture 3 : How Matter is Organized Lecture 3 : How Matter is Organized. Chemistry is the science of the structure and interactions of matter. all living things consist of matter. Matter is anything that occupies space. mass is the amount of matter in any object. weight is the force of gravity acting on matter.

Lecture 3 : How Matter is Organized

Biochemistry Unit - . powerpoint #1 – the basics and water…. matter. defined as anything that takes up space and has

Introduction to Matter - . what is matter? what kinds of matter are out there?. matter. matter. anything that has: mass

Matter - . chemistry 332 o’dette. what is matter?. anything that has mass and takes up space all matter is made of

Study Skills: Getting Organized - . are you an organized person?. what does your room look like? what does you locker

States of Matter - . solids. matter. the state of matter tells you whether a material is a solid, liquid, or a gas.

Matter and Change - . unit 2. chemistry is the study of matter and the changes that take place with that matter. matter

MATTER - . true/false quiz. matter must have mass matter must take up space air is matter matter can be in different

Organized for Success - . definition of organized to systematize: to organize the files of an office. to put (oneself)

Matter Class #1 - . ob: we will determine what matter is, what are the phases of matter, and describe physical properties

Matter - . fourth grade. the student will learn:. what matter is. how to identify matter. the three different states of