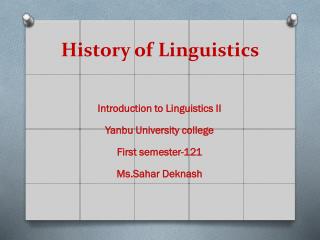 Branches of Linguistics - . branches of linguistics. linguists are engaged in a multiplicity of studies, some of

Linguistics of swearing - . http://lucyvee.blogspot.fi/2009/10/fck-off-you-cnts-swearing-in-scripts.html. by hilla and

Linguistics of Swearing - . by sara, ravindu &amp; andrew. general information. in every language ( more common in

Linguistics - . the seventh week . revision. the phenomenon of the linking of words in speech, in particular when the