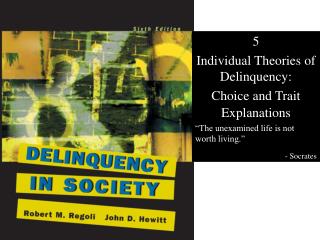 5 Individual Theories of Delinquency: Choice and Trait Explanations “The unexamined life is not worth living.” - Socrates. Individual Theories. Blame delinquency on either free will or personal traits such as temperament, genetics, and brain chemistry. Sociological Theories of Aging (1) - . introduction. this chapter presents some answers—theoretical statements that

Subcultural Theories - . ▪ several theories emerged from late 1950s through the 1960s ▪ attempt to explain the

Theories of Practice: The Functions of the Chief Executive Officer - . mpa 8002 the structure and theory of human

Gangs and Delinquency - . chapter objectives. after completing this chapter, you should be able to:. explain the

Trait and Factor Theories - . trait and factor theories. basic premise: we are attracted to a given career by our

Classic theories of Development - . a comparative analysis. outline. the quest for growth the financing gap investment