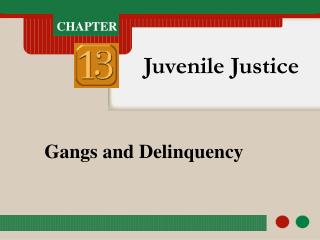 Gangs and Delinquency. CHAPTER OBJECTIVES. After completing this chapter, you should be able to:. Explain the difficulties in accurately defining a gang, gang member, and gang-related crime. Describe the extent of the gang problem. Differentiate between types of gangs. Gangs and Crime - . the consensus based approach to defining gangs: walter miller. surveyed police and youth workers in

GANGS AND CRIME - . origin of gangs . gangs have been in america since the 19 th century. q: what have gangs nearly

Respect and Gangs - . facilitated by keys academy and options high school with the arise foundation. your presenter…. a

Crime and Delinquency - . biology and

Gangs - . what is a gang?. a group of people who form an allegiance for a common purpose, and/or who engage in

Schools and delinquency - . schools. children more at risk if they are truant or have dropped out of school more at risk