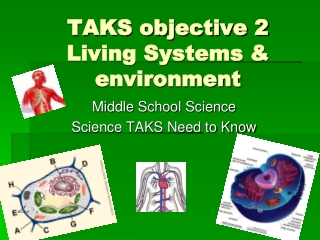 TAKS objective 2 Living Systems & environment. Middle School Science Science TAKS Need to Know. All living things are made up of cells. Unicellular (Single-celled)- organisms that are made up of only one cell. TAKS Objective 4 - Teks 7.6 a science concepts. demonstrate how unbalanced forces cause changes in the speed or direction

Class TAKS Review Objective 4 - Matter. anything that has mass and takes up space.energy is not matter. matter is divided

Objective 10 TAKS 9th Grade - 8.14a identify and apply mathematics to everyday experiences, to activities in and outside

TAKS Objective 3 - . coach smith waco high chemistry 2006-2007. objective 3. which of these conditions is caused by

Class TAKS Review Objective 4 - . matter and change . matter. anything that has mass and takes up space. energy is not

TAKS Short Course Objective 3 - . 6.6(a) the student is expected to use angle measurements to classify angles as acute,

TAKS Objective 5 - . earth and space systems part ii. taks overview. 12 questions out of 60. you need at least 9 right to

TAKS Objective 5 - . the student will demonstrate an understanding of earth and space systems. teks science concept 8.14