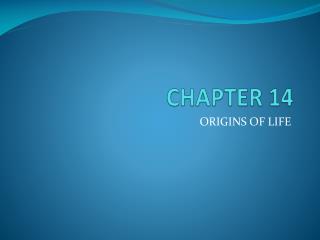 CHAPTER 14. ORIGINS OF LIFE. Spontaneous Generation. for much of history, people believed that animals could come from non-living sources. this is called abiogenesis also known as spontaneous generation. 1668 -- Francisco Redi (pg 261). Redi’s critics said:. You have excluded AIR