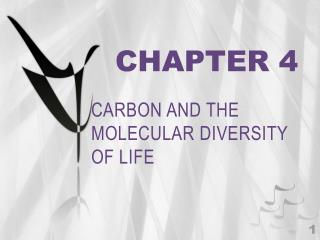 CHAPTER 4. CARBON AND THE MOLECULAR DIVERSITY OF LIFE. Overview: Carbon—The Backbone of Life. Aside from water, the most biologically important molecules are carbon-based (organic). Although cells are 70–95% water, the rest consists mostly of carbon-based compounds