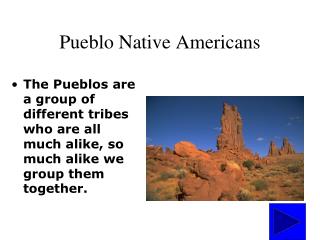 Pueblo Native Americans. The Pueblos are a group of different tribes who are all much alike, so much alike we group them together. Pueblo Tribes. Tigua Jumano. Pueblos. Their name, Pueblo, is Spanish and means "town".