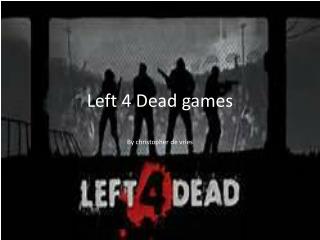 Left 4 Dead games. By christopher de vries. What is left 4 dead?. An Xbox, PlayStation and PC game. A zombie game where teamwork is everything. A new scene on the classic zombie shoot’em up genre. The zombies. TheOnly 46 Days left until the Olympic Games begin - Olympic riddles. . greece. what is the name of the country where the

left - . heading of the ppt will come here. nexgen hr. october 11, 2010. our vision. to be a dedicated business partner

LEFT - . left returns the first character or characters in a text string, based on the number of characters you specify.

Why the 4 Year Degree is Dead - Put a fork in it. close the coffin up. write down the date.