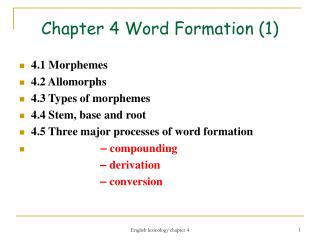 The Pedagogy of Liturgy - . teaching ministry faith formation christian education. remembering our purpose: . there is a

Word Formation in English - . conversion conversion is a main type of word-formation assigning the base to a different

Word Formation - . nuha alwadaani. open para 1. p. 52. it is a fact that we can understand and cope with new words

Formation of Questions - . by: logan pille. formation of questions. in german the word order to form a statement is