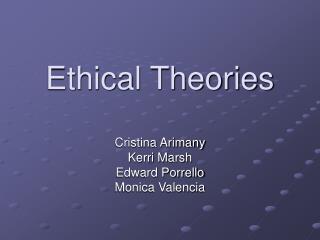 Research Ethics and Basic Ethical Theories - . tools for reflection on and evaluation of educational research (?) jon

Ethical Theories Ethical Perspectives - There is no real ethical theory. what one person believes is intolerable, duty,

Moral Systems, Ethical Concepts &amp; Theories - . chapter 2. everyone is entitled to his or her own opinion,

BPS Guidelines for Psychologists working with animals-2007 - . do the ends ever justify the means?. each person will have

Ethical Theories - . high-level account of how questions about morality should be addressed. similar to engineering