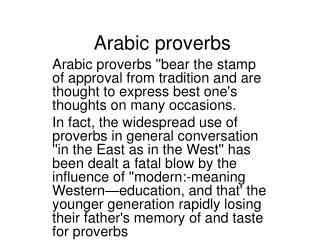 Arabic proverbs. Arabic proverbs ''bear the stamp of approval from tradition and are thought to express best one's thoughts on many occasions.

Proverbs on Peer Pressure - . a teaching class by rolan monje. proverbs – a book for the youth. proverbs is a great

Arabic studies 1 - . nearly every-arabic letter can be joined to its neighbour from both sides (normal letters), and they

Arabic Language - . الدّرس الأول. introduction. the arabic alphabet is written from right to left. there are

Adjectives in English and Arabic - . what does adjective mean ?. an adjective is a word typically denotes properties of

SOCIOLINGUISTICS OF ARABIC - . sinfree makoni february, 2012. rationale. question: is it possible that the us-led war on

Lesson 92-93 – Proverbs, Ecclesiastes, Song of Solomon - . wisdom literature. proverbs. what is a proverb? who does it

Proverbs 3:1-12 - . self-discipline diligent application of godly principles to our lives by the teaching of the word of

Ancient Arabic Literature - . folk tales. arabic literature. authors are anonymous—why? what is a folk tale? what is

Putting the Proverbs to Use - . facts on proverbs. proverb means “parallel” or “similar” proverb is “a

Introduction to the Arabic Alphabet - Key differences from english. arabic is written from right to leftthere are no

English and Arabic Proverbs - . according to oxford concise dictionary proverb is ‘a short saying in general use, held

Arabic - . by: amnah said . introduction :. arabic ranks sixth in the world legal table of languages. with estimation of