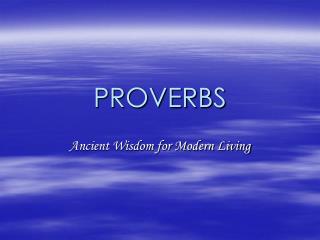 PROVERBS. Ancient Wisdom for Modern Living. Solomon. Author of the Proverbs King of Israel Son of King David Built the temple Wisest man in the world Had his own sin problems. Date of Writing. Incorporating Literature into the Study of the Holocaust - . pam gannon teacher librarian september 2007. the soul of man

Wise Up About CONFLICTS - “embracing change to experience life!”. wise up about conflicts. proverbs 10:17. proverbs

Unit 5 Overcoming Obstacles - . text a true height. proverbs: where there’s a will, there’s a way .

Language and Cultural Meaning - . a man who waits for a roast duck to fly into his mouth must wait a very, very long

The Language of the Bible - . “it is the glory of god to conceal a thing: but the honour of kings is to search out a

Availing Much ? - Proverbs 29:18 where there is no vision, the people perish : but he that keepeth the law, happy is he.