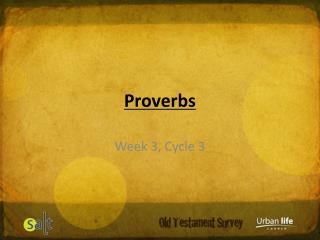 Proverbs. Week 3, Cycle 3. Proverbs:. Authors : King Solomon Agur King Lemuel. Proverbs:. “Yaweh” is mentioned 90 times in the book It does not mention priests, prophets or kings The book is quoted directly 14 times in the rest of Scripture Proverbs - . proverbs. proverbs. 25-27. the secret things belong to the lord our god, but those things which are revealed

Proverbs - . proverbs 1:1 the proverbs of solomon the son of david, king of israel:. 1 – 9 solomon teaches his son the

PROVERBS - . ancient wisdom for modern living. solomon. author of the proverbs king of israel son of king david built the

PROVERBS - . the book of wisdom. poetical books. title of the book. the proverbs of solomon the son of david, king of

Proverbs - . absence makes the heart grow fonder. missing someone makes you like them more. i really miss my family, but

Proverbs - . the bible and wisdom (andy emerton - focus 2012). proverbs. ‘the fountainhead of the wisdom movement’