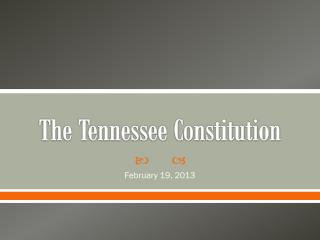 The Tennessee Constitution. February 19, 2013. Oh, Mommy. Oh, Mommy, I ain’t no Commie I’m just doing what I can to live the good old all-American way It says right there in the Constitution It’s really A-OK to have a revolution When the leaders that you choose

Constitution of Express Trusts - . prof cameron stewart. ways to create a trust. 1. by declaration , where a titleholder

Eddington and The Internal Constitution of the Stars - . what appliance can pierce through the outer layers of a star and

Chapter 7, Section 1 - . creating a republic. the states write constitutions. constitution – a document that sets out

Date: Wednesday March 26 - Tswbat explain what the constitution is, why it is an important american document, and

Constitution Review I - . the supreme law of the land. “we the people of the united states…”. the three parts of

The Canadian Constitution - . constitutions. what is a constitution?. it is a list of rules which govern the actions of