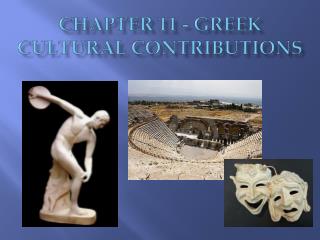 Chapter 11 - Greek Cultural Contributions. Lesson Essential Question 1 – Where are the important city-states, features, and bodies of water for ancient Greece located on a map?. A. Locate and label items on the map of the Aegean World. Chapter Focus Why Its Important (p. 179).

aNCIENT gREEK pHILOSOPHY - . what is philosophy?. philosophy. means love of wisdom a philosopher is a lover of wisdom, a

Ancient Greek Mythology - . origin. greek mythology is the body of myths and legends belonging to the ancient greeks

Ch 11 and 12 - . ch 11-cultural contributions of the greeks ch 12- the hellenistic period: alexander the great. section 1

Victory and Defeat in the Greek World - . the persian wars. athens: most wealthy greek city-state ionian states were

Greek Pantheon - . you want gods, we got ‘ em . how it works. the ancient greeks attributed deeply human

Ancient Greek Shield - . history behind the shield. the ancient greeks in place of flags had shields bearing distinct

Helios (Greek Sun God) - . by frankie figliomeni 3.13.12 period 2. introduction. the name of my god is helios he is known