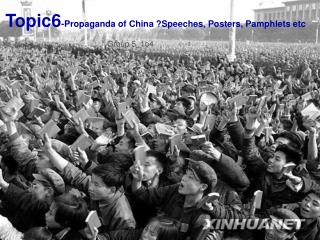 Topic6 -Propaganda of China ?Speeches, Posters, Pamphlets etc. Group 5_1o4. A introduction of the great leader of the people’s republic of china. Mao zedong - A chinese revolutionary, political theorist and communist leader. He was the leader of World War II Propaganda - . propaganda. n : information that is spread for the purpose of promoting some

Techniques of Propaganda - . aesthetics, emotion, and argument. making a wildlife documentary – a broken

The Function of Music as Propaganda: - . “ to agree or not to agree”. propaganda, it’s all around us!. billboards

Propaganda and Military Operations in the ‘War against Terrorism’ - . philip m. taylor professor of international