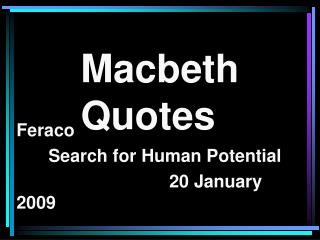 Macbeth Quotes. Feraco Search for Human Potential 20 January 2009. Quotes!. You will be asked to translate quotations from Macbeth on your exam. Each slide contains a quote, as well as information about: A) The speaker B) The speaker’s audience Analyzing Quotes from Macbeth - . pee practice. giving evidence. it is crucial that you pee in your writing to make it as