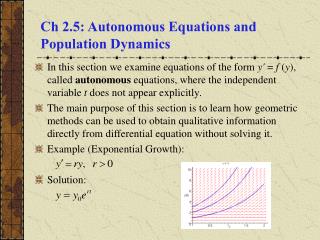 Ch 2.5: Autonomous Equations and Population Dynamics. In this section we examine equations of the form y ' = f ( y ), called autonomous equations, where the independent variable t does not appear explicitly .

Chapter 3 – Solving Linear Equations - . algebra 1 fall 2013. what will we do in chapter 3?. solve linear equations

Net Ionic Equations - . there are 8 questions and you must answer 5 on the ap exam!. net ionic equations i. iron(iii)

Population Dynamics - . population – a group of organisms of the same species occupying a particular space at a

Population Dynamics - . unit 2 apes. why study human population?. the world may or may be soon overpopulated.

Autonomous Haulage Trucks: - . the future is now!. john a. meech university of british columbia. charles darwin. it is

Population - . chapter 2. importance of studying population. 6.75 billion people living on earth—more than ever