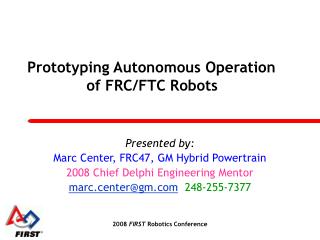 LabVIEW for FRC - . nyc / nj software workshop january 7, 2012 jeff.steele@ni.com. agenda. what you will need to be

DELPHI experience - . i left collaboration in 1997 so i won’t talk about data preservation but another costly effort

MSJ Tech and Robotics - . an introduction. what is robotics?. designing, prototyping, building, and programming creating

Welcome to FIRST Robotics Team 2168 The Aluminum Falcons - An overview of first robotics and the aluminum falcons.

ROBOTS IN RADIOACTIVE ENVIRONMENTS - . introduction. in a critical place such as a nuclear power plant , where the manual

MARC 21, FRBR, RDA - 2. objectives. connect marc fields and subfields to the appropriate entity and attribute of