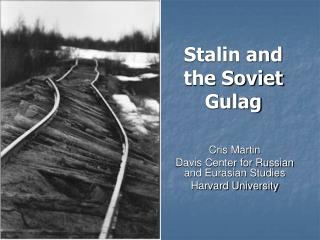 Stalin and the Soviet Gulag

Stalin and the Soviet Gulag

STALIN: - . mad, bad, and sad. josef stalin. not his real name, he’s not even a russian. born in georgia (caucusus) in

Joseph Stalin - . 1879-1953. background info. joseph stalin was the second leader of the soviet union. his real name was

Demography of Russia and the Former Soviet Union - . lecture 4 sociology soci 20182. sources of data about population.

Russia and Stalin Man of Steel - . the beginning of the soviet project. the bolsheviks had consolidated power by early

JOSEF STALIN - Communism stands for a stateless society where all are equal . no one is rich or poor in a communist

Joseph Stalin - . before his death, lenin warned, “comrade stalin… has concentrated enormous power in his hands, and

Joseph Stalin - . by: patrick mclaughlin. stalin's family . stalin's dad was a shoe maker his mother has a wash woman

STALIN’s GULAG ARCHIPELAGO - . the role of slave labor and the labor camps in the ussr’s industrial revolution. the

Cold War ghosts haunt Latvia - Hidden in the forests of aluksne, near latvia's border with russia, the remains of a