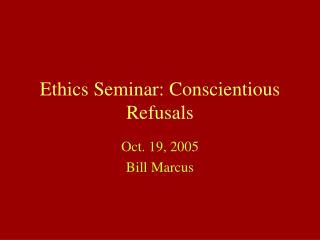 Ethics Seminar: Conscientious Refusals. Oct. 19, 2005 Bill Marcus. Refusal by Whom?. By physician or other clinician Nurse practitioner or certified nurse midwife Physician assistant Pharmacist By pharmacist in a pharmacy. Refusal of What?. Request for lethal drugs Legal execution Ethics and Morality - . the words. morality , from latin moralis (custom). actions are moral if they are “good” or

Ethics and the Law - . computer ethics. a branch of philosophy that deals with computing-related moral dilemmas and